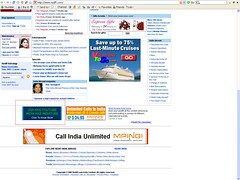 It links to meraaindiatube.com, which atm is a fugly site.

I don’t know what’s up with major Indian sites claiming to be web 2.0 and stuff with real bad design. I am not just talking about the color scheme or design in general, but the whole usability aspect. Be it TOI, Rediff or naukri all of them have a bunch of popups, tons of banner ads and non-existent user driven design. I have heard from a lot of people living in India that it is hard to find a good designer there. Is finding good designers a big problem in India? Would love to hear what people know/believe.

Slideshare.net, a great product comes from a company Uzanto which has operations in India and USA. I really liked their simple design. Ofcourse their core audience is not Indians, but it seems like they have Indian designers working on the site.